Map of South-Africa with a selection of cities, parks and biomes 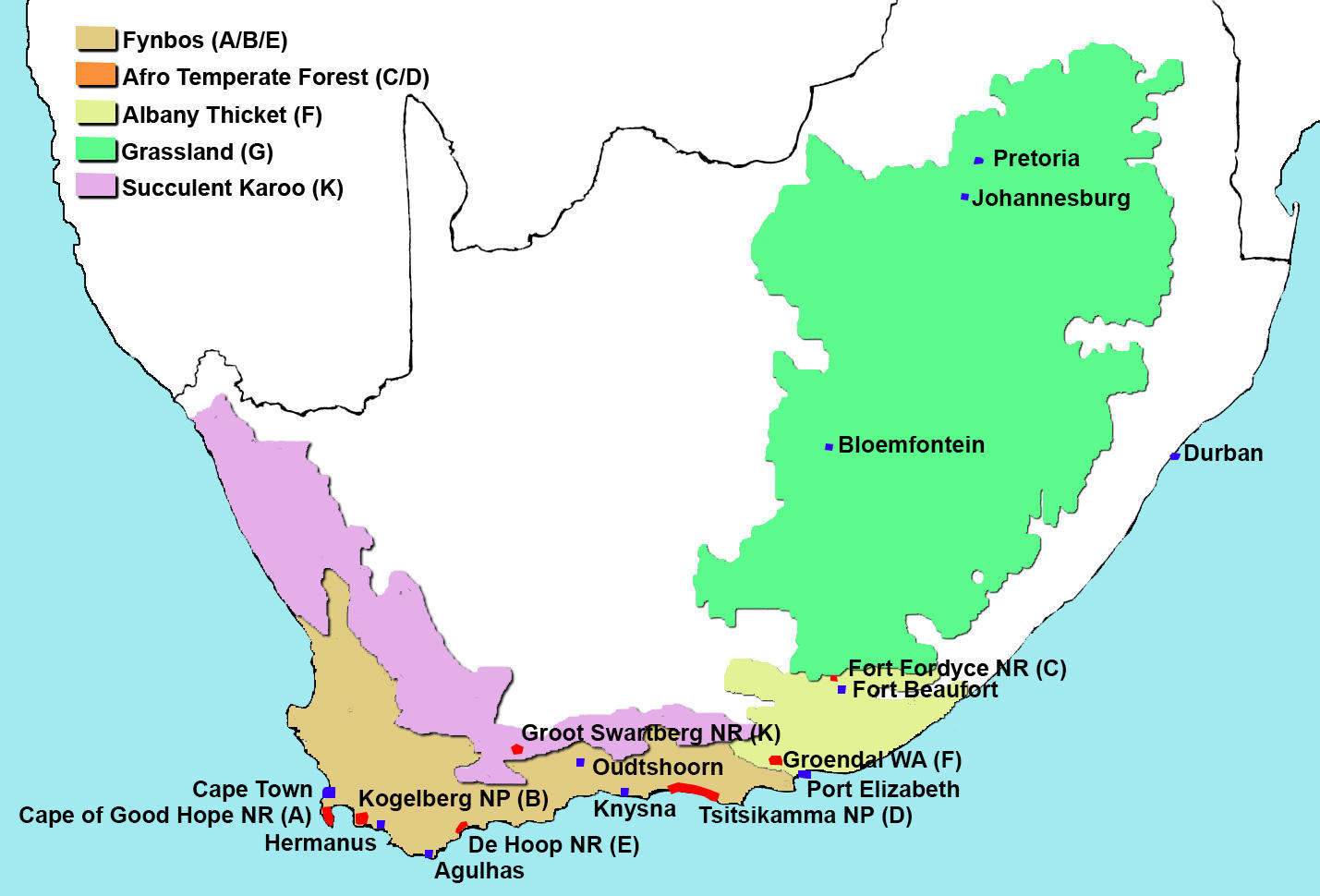 On a total area of 22 acres dedicated to South African landscapes, 5 acres will be accessible by a guided tour through different mood images. This tour will give a condensed view of what South Africa offers of Mediterranean-type flora..

Seven biomes (a biome is a formation of plants and animals that have common characteristics due to similar climates and can be found over a range of continents) have inspired the Botanical Park of Château Pérouse for the establishment of the zone "South Africa".

These areas are on the route of the guided tour of the Botanical Park:

South Africa zone - Zoom to see the detail of plantation

South Africa covers an area of 1,220,000 km². The Mediterranean zone extends from Cape Town to Port Elizabeth and forms a strip along the coast. There are about 8,700 species of plants on an area of only 90,000 km² (approximately 3% of global Mediterranean areas). The endemism rate is 68%, which is exceptional for such a small surface.

The Mediterranean zones are located west and southwest of the continent and are influenced by cold ocean currents: concerning South Africa, it’s the Benguela current. The living species of this climate have to endure two difficult seasons: the cold and the wind in winter and a long and dry summer. Mild temperatures in spring and autumn cause heavy rains, floods and soil erosion. 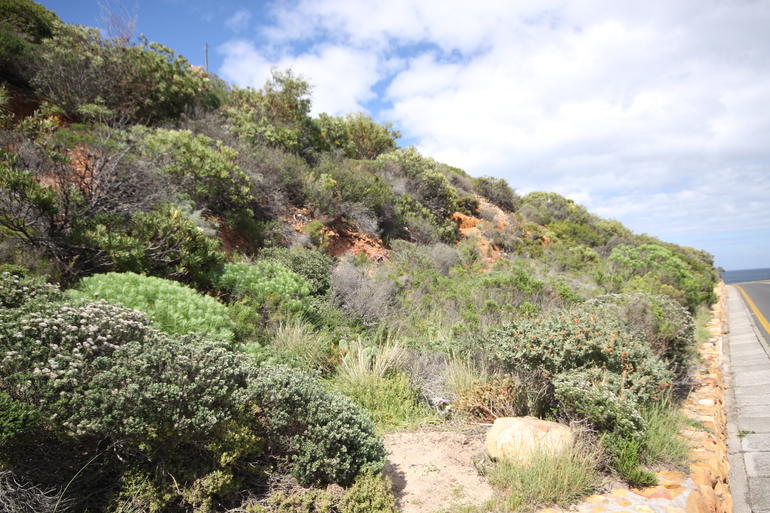 It’s a characteristic landscape limited to a narrow coastal and mountainous area having a Mediterranean climate. Generally the fynbos soils are low on organic matter, but their composition varies. It’s possible to distinguish two types of fynbos. In the mountains where the climate is more even and snowfalls are common in high altitude and along the coastal areas where temperatures can reach 40°C and sea spray is frequent in addition to sometimes very strong winds.

Fire is an essential process for the renewal and diversification of the fynbos. Repeated fires over thousands of years have created a specific ecosystem. Fire allows the phases necessary for the life of shrubs. It permits the continuation of a rich and long adapted flora. Minerals such as potassium are released by the fire which is important for the poor soil. The biome is characterized by alternating phases of being herbaceous (after the fire) and shrub land (until the next fire).

Some species have synchronized flowering as a result of fires. Thus their name Fire-Lilies (Cyrtanthus).

The South African government has set a preservation program of this heritage. This region risked being destroyed by agricultural development and the increase of urban areas (on the outskirts of Cape Town in particular). The program also seeks to eradicate the proliferation of alien species to protect native species.

Protected Areas of the Cape Floral Region are covering 553,000ha. This is one of the richest vegetable areas on the planet. These areas have been included in the list of UNESCO World Heritage since 2004. 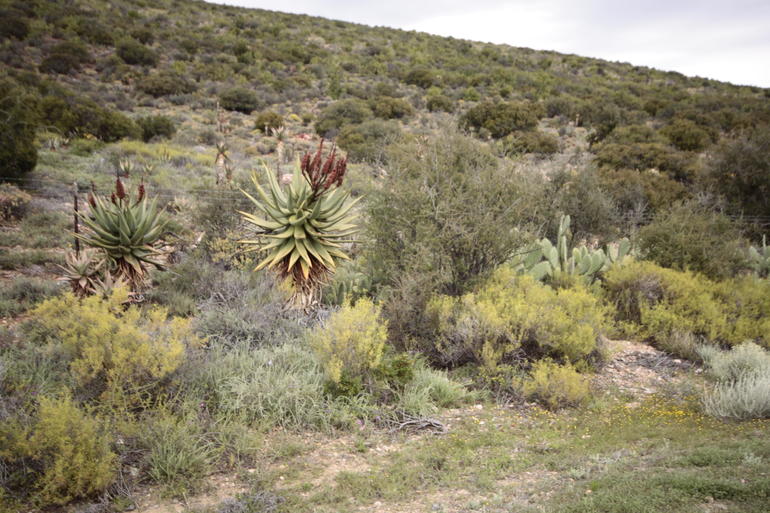 This type of vegetation has only recently been described in the scientific literature. Instead of growing into a forest these mixed areas develop, which have a certain fire resistance. Rainfall is too low for a real development of large trees. The trees that grow there do not have the necessary height to be classified as the type "forest".

The trees who are supposed to create the leaf roof will not grow in abundance. This is not a type "savanna". In fact, scientists define "tickets" as transitional areas composed of smaller sized trees and medium sized shrubs.

The bushes grow in sandy, well drained soils in wide valleys. These areas are still vulnerable to fire and are used for grazing. The climate is dry and cold, because the valleys receive less sunlight. As the surrounding grounds are warm, precipitation is not regular.

Thickets contain endemic plants, especially the succulent Euphorbia species. Thickets are more dense in the valleys near the coast. They are composed of thorny shrubs and undergrowth of vines and succulents. The more we enter the continent, the more dry the climate gets and with a less dense vegetation. The "thickets" represent the Cape flora by means of the fynbos. 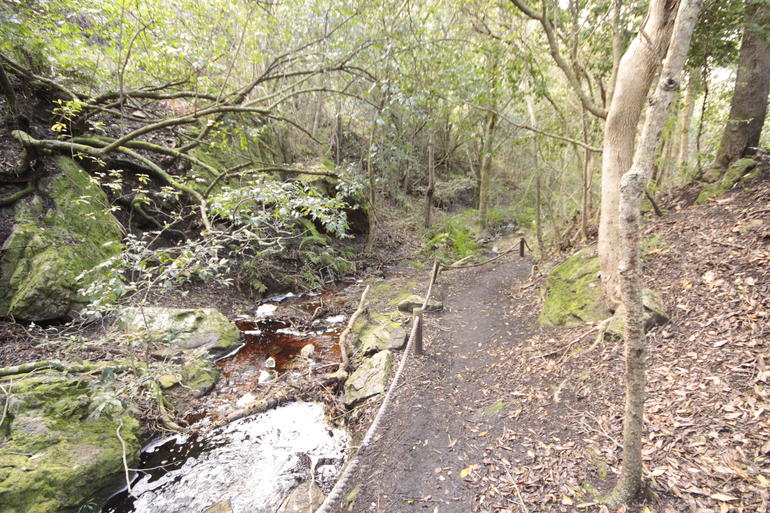 South Africa is a relatively dry country, forests exist only along the steep slopes to the east and on some parts of the coastal strip south of the Cape Peninsula. These forests are the smallest and most fragmented biomes on only 0.2% of the space. They are cool and temperate, very different from Central Africa's tropical rainforest. African mountain forests are characterized by regular fogs that replace the rain and facilitate their development.

In the North-East, Cape KwaZulu NP is composed of a mosaic of vegetation along the eastern coast of South Africa. These forest areas are commonly called Northern Afro Temperate Forest. The inland boundary is located at the foot of the Drakensberg Mountains. The coastal plain is frost-free and allows the development of subtropical forest. In the southern part of this ecoregion the temperatures range between 50°F and 75°F. The forests of Cape Kwazulu NP are divided into 3 parts: the coastal forest, transition forest and the dune forest which as the name suggests, grows on sand dunes.

The Southern Afro Temperate Forests, are located in the area between Cape Town and Port Elizabeth, especially in the Tsitsikamma NP. Etymologically, Tsitsikamma comes from the Khoisan (language of the first inhabitants of the region) and means "a place where there is a lot of water". The park includes 80km of rocky coastline with spectacular landscapes, a remote mountainous region with lonely valleys covered in fynbos and temperate forests located in deep gorges that lead to the sea. The average annual rainfall is 1200mm.

The Tsitsikamma NP offers in addition to its marine part, a ground part with lush indigenous forest, fynbos and steep cliffs. One of the most emblematic trees is the Podocarpus falcata.

Many of the old trees there were cut down by early settlers, however important pockets of natural forest still remains in protected areas and in isolated valleys. 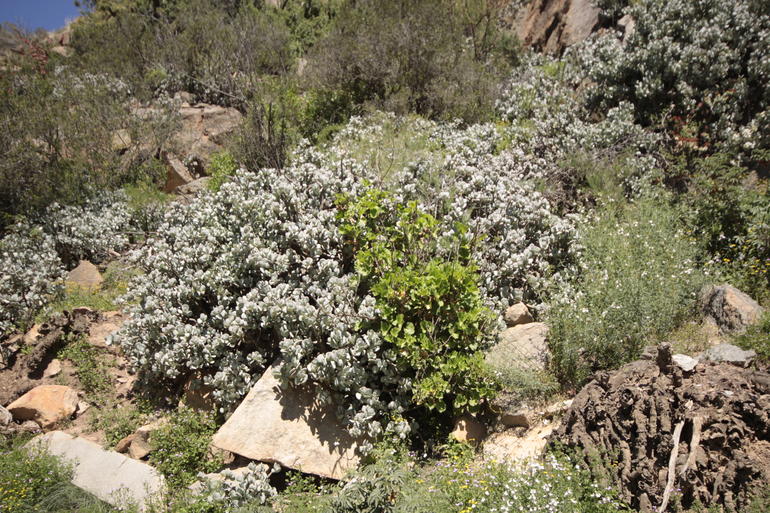 This biome is neighbour to the Mediterranean climate zone. It has an equal status to the other biomes of South Africa and is not a subtype of the karoo biome. Most of the biome covers a flat to gently undulating plain with some hilly and broken fields, mostly situated to the west and south of the escarpment and north of the Cape Fold Belt.

The altitude is mostly below 800m, but in the east it may reach 1500m. A variety of geological units occur in the region. There is little difference between the soils of the succulent Karoo and Nama Karo Biomes, both are lime-rich weakly developed soils on solid rock. The Olifants and Doring rivers are the major drainage systems in the west, with the Gouritz river in the south-east of the biome.

During summer, temperatures in excess of 40°C are common, fog is common nearer the coast and frost is infrequent. Desiccating, hot mountain winds may occur throughout the year. The vegetation is dominated by dwarf, succulent shrubs. The number of plants species mostly succulent, is very high and unparalleled elsewhere in the world for an arid area of this size. 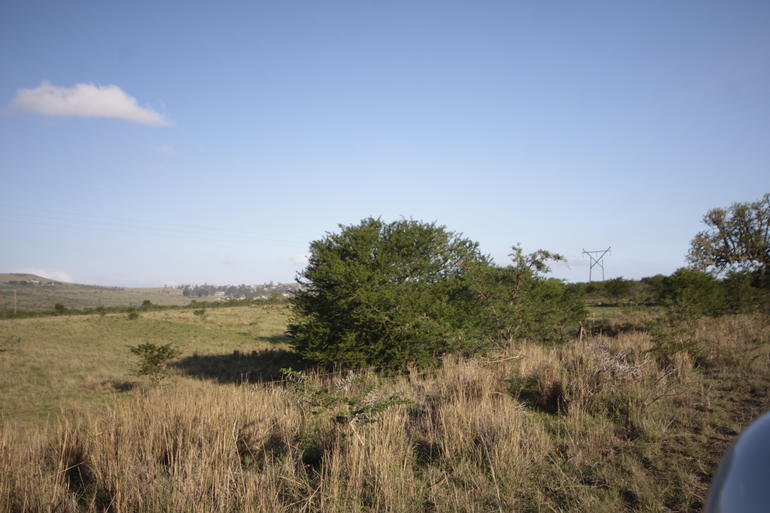 The Grassland biome is found mainly on the central plateau of South Africa, in the inland areas of KwaZulu-Natal and the Eastern Cape. The topography consists of plateaus and escarpments. Elevations range from sea level to nearly 2850m above the level of the sea.

The Grasslands are dominated by a single layer of grasses. The height of the coverage depends on rainfall. The trees are absent except in a few localized habitats. Through frost, fire and grazing the domination of grass is maintained.

The Grassland biome is considered to have a high biodiversity, second only to the fynbos biome. Rare plants are often found in meadows, especially in the area of the escarpment. These rare species are often at risk, including endemic geophytes and flowering grasses. Very few of the grasses are rare or endangered. 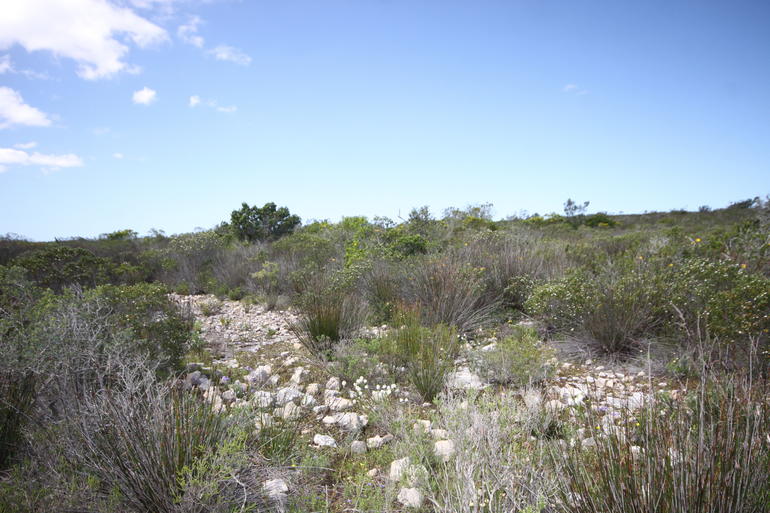 Restio’s – short for plants of the Restionaceae family. They are spread across the Southern Hemisphere from South America to New Zealand and Australia but, their greatest abundance is in South Africa. Here, there are some 350 species and these are overwhelmingly concentrated in the Western Cape.

The Cape Floristic Region is the real home of the Restio family where they dominate much of the landscape. They appear to date back to the Cretaceous period – some 60 million years ago. This means they were around long before the grasses. Based on fossil records it is generally accepted that Restio’s originate from the ancient Gondwana continent. This could explain their presence from South America to New Zealand. Because the land masses had not yet broken up and the plant group had already radiated into each of the future regions of the Southern Hemisphere.

Restio’s generally occur naturally on nutrient poor acidic soils however, 15 species occur on limestone soils and 8°Ph upon alkaline sands. The flowers are usually small and are wind pollinated. Being mostly from Mediterranean climates they are well adapted to summer drought. The majority of Restio’s are hardy down to about -7 or -8°C. Some are tougher than that withstanding temperatures down to -14°C undamaged. 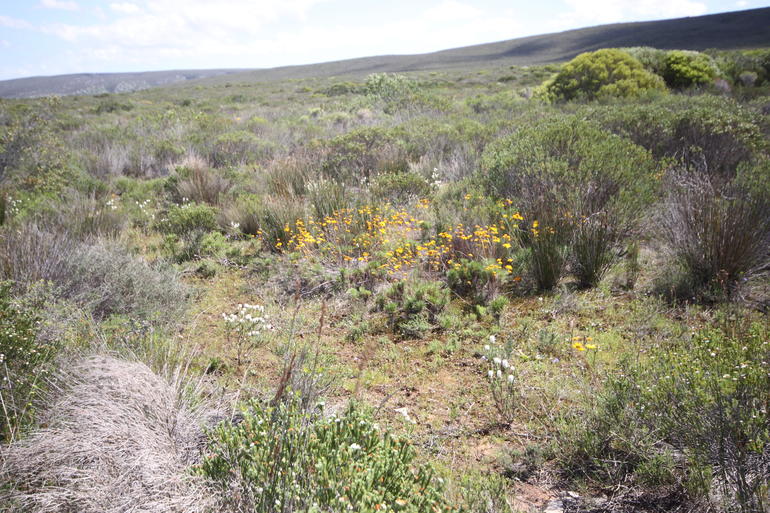 Cape Agulhas is a rocky heathland in the Western Cape, South Africa. It is the geographically most southern tip of the African continent and according to the International Hydrographic Organization, the beginning of the dividing line between the Atlantic and Indian Oceans. Cape Agulhas is located in the Overberg region, 170km (105mi) southeast of Cape Town.

It is south of Cape Agulhas that the warm Agulhas Current, that flows south along the east coast of Africa, bending back into the Indian Ocean. While returning, it pinches off large ocean eddies (Agulhas rings) that drift into the South Atlantic Ocean and take enormous amounts of warmth and salt into the neighbouring ocean.

The rocks that form Cape Agulhas belong to the Table Mountain Group. They are closely linked to the geological formations exposed in the spectacular cliffs of the Table Mountain, Cape Point and the Cape of Good Hope.

According to the South African National Parks, who administer the nature reserve, the average rainfall is 400–600mm per annum, mostly received in the winter.

The Agulhas Plain covers 270,000ha of semi-arid, lowland fynbos and Renosterveld. Located in the Cape Floristic Region Biodiversity Hotspot, the area is a globally significant repository of biodiversity, recognized for its high irreplaceability and vulnerability. The plant diversity is remarkable, with almost 2,500 now known species.

The Agulhas region is unique in terms of the wide variety of wetlands (freshwater springs, rivers, estuaries, lakes, marshes) that occur within a relatively small area.

It's impossible to name all the species and varieties that will be planted on this course. Here in pictures an idea of what will be possible to discover

Landscapes under development for the South African section 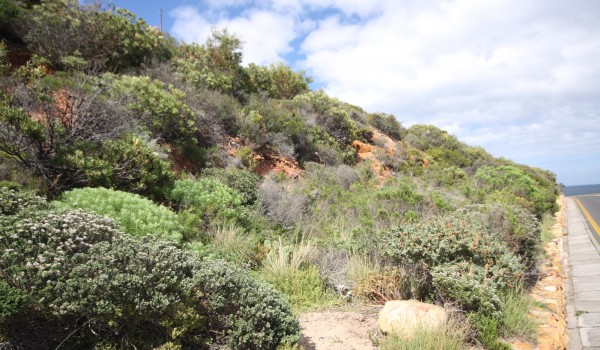 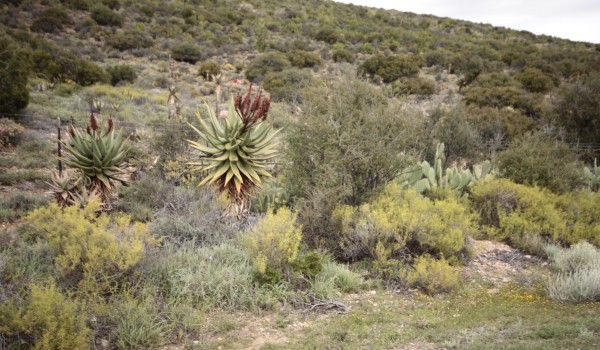 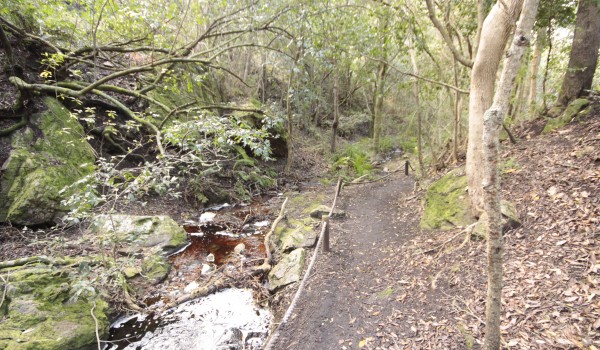 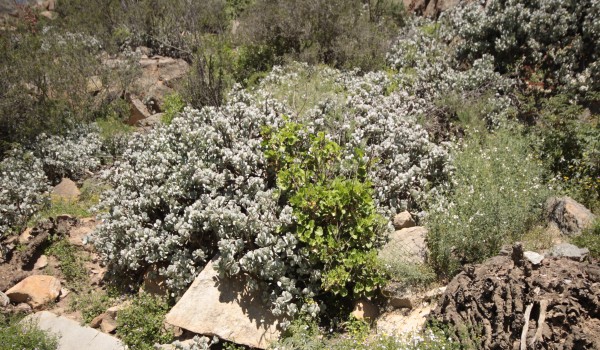 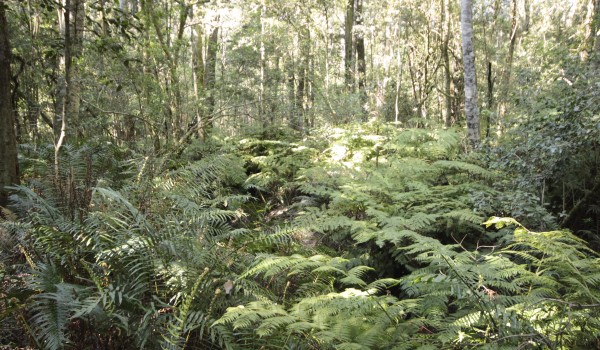 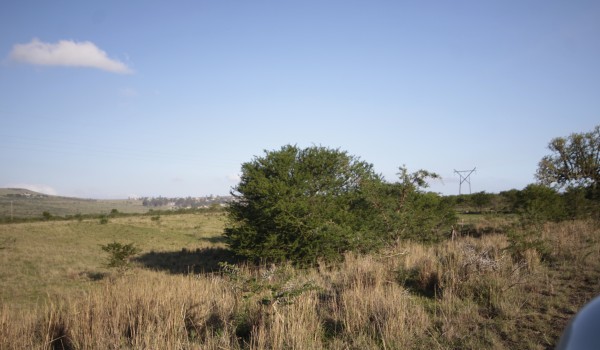 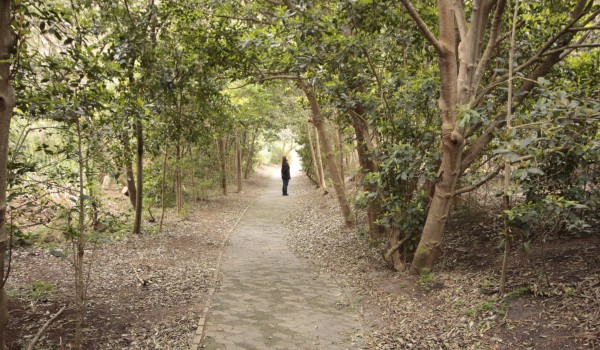 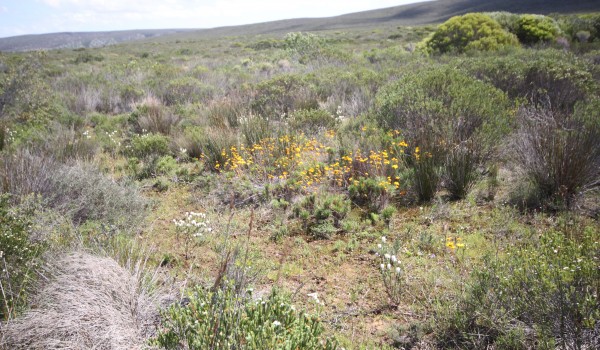