Map of Chili with a selection of cities, parks and biomes 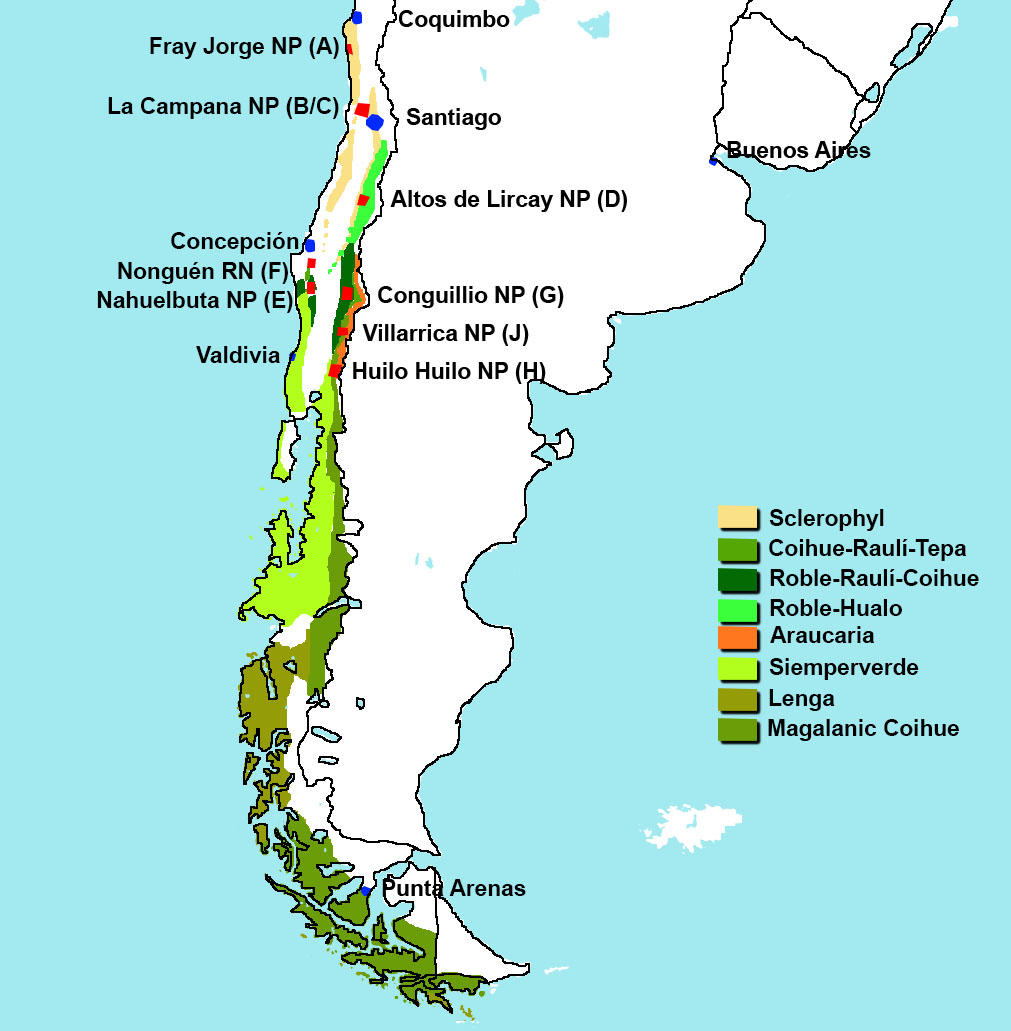 On a total area of 12 acres dedicated to Chilean landscapes, 2.5 acres will be accessible by a guided tour through different mood images. The tour will give a condensed view of what Chili offers of Mediterranean-type flora.

These environments have been zoned with the same names as Chilean national parks. So the visitors can find a resonance between the botanic park of Château Pérouse and that what it is possible to discover in this distant land.

These areas are on the route of the guided tour of the Botanical Park :

Chile zone - Zoom to see the detail of plantation

Chili stretches over 760,000km². As foreigners we have to realize that the distance between the north and south of Chili is equivalent to that between the sources of the Nile in southern Sudan and the city of Copenhagen in Denmark. Because of its specific geography, Chili can be compared floristically to an island. Imprisoned in the West by the Pacific, in the north by the Atacama Desert, in the east by the majestic Andes mountains and in the south through the icy waters of the Antarctic. The Mediterranean area is approximately 280.000km², 36% of its entire area. It is also the most populated area.

The Mediterranean area extends between Antofagasta on the 38th parallel and the 40th parallel. A small Mediterranean enclave also exists in the temperate southern trans-Andean around Chili Chico near Perito Moreno, at the Lake of Buenos Aires, near the Argentine border. These Mediterranean climate zones rise high in the Andes, south of the 25th parallel. (Source: H.N Le Houérou). It is a surprise to see comparable plants and climate in California. With this reversal due to the equator line, the evolution of the Northern vegetation in southern Chili is the same as California but this time from South to the North.

There are three types of Mediterranean climate in Chili:

The predominant climate in the north central zone of Chili is the Mediterranean. The humidity and moderate temperature are the result from the proximity of the Pacific Ocean. In winter the temperature drops sharply and morning short frosts are frequent. Snowfalls are low in the Pre-Cordillera and in its eastern part.

In summer, further south of this region, in the cities of Chillán, Talca and Linares are high temperatures observed. Further South, the cold becomes more intense because of polar air-currents and much rainfall. The Mediterranean climate oblige flora to endure drought from spring to autumn. The vegetation adapts through morphological changes.

According to the catalog of Marticorena and Quezada (1985), the flora of Chili includes 192 families, 1,032 genera and 5,215 species. The 2,700 Chilean endemic species represent 52% of all species. Within the endemic flora, we can find for example, the austral beech (Nothofagus), from which 3 species are sclerophyllous and 8 species are deciduous; 80% are present in the Chilean Mediterranean area.

The National Park La Campana is an example of the mixed composition of geo-botanical elements, located at 33°S, in the centre of the Mediterranean area. Note the predominance of new-tropical species as well as those from the period of the super continent Gondwana. Mediterranean Chili has a wealth of plant species indicating an active evolution in recent geological period.

The flora of the Mediterranean Chili is characterized by the existence of many endemic and unique genres. Almost 52% of the taxa are endemic to Chili. 30% are endemic to central Chili itself. The international scientific community has recognized the importance of the conservation of the species endemic to Chili.

Inside the ecoregion of the Chilean "garrigue" grows the sclerophyllous forest. This plant formation typical of sclerophyl Chili, located between the Valparaíso Region and the Biobio Region, where xeromorphic species develop with persistent and tough leaves to withstand the summer-drought. The vegetation has a scarce stratification allowing a herbaceous shrub undergrowth.

The ecoregion, called "Matorral", has many endemic plant species with affinities to the South American tropics, the fauna of Antarctica and of the Andes.

Home to a rich diversity of plant and animal species, there are high levels of regional and local endemism, particularly among plants. The 'Matorral Chileno' constitutes a 100km-wide strip extending along the central part of the Chilean coast.

Many species of cactus grow throughout the 'Matorral Chileno'. Nearly 1,500 species of plants are endemic to the region. The ecoregion is threatened by conversion for agriculture, pasture development, frequent anthropogenic fires, exotic species, and grazing.

This long and narrow ecoregion is limited in the west by the Pacific Ocean and in the east by the southern Andes. It represents the transitional habitat between the ultra-dry Atamacama Desert to the north, and the moist Valdivian temperate forests to the south. Slowly the landscape changes from semi-desert (Trichicereus spp and Bahia ambrosioides…) to a form of bush (Acacia caven, Puya chilensis, Fuchsia lycioides…) and finally into the 'Matorral'.

It is located between 32°S and 37°S latitudes, from just south of La Serena to just south of Concepción. The difference with the Californian chaparral is the occasional presence of a palm tree (Jubaea chilensis), arborescent bromeliads in the genus Puya, and columnar cacti such as Trichocereus chiloensis. The herbaceous cover is also mostly composed of perennials (primarily geophytes) rather than annuals. A particularly good place to see several mediterranean vegetation types together is the National Park La Campana.

The Chilean area of the 'Matorral' is relatively small, extending up to about 5,000 feet elevation. Moist seaward slopes within the 'Matorral' region can be covered with a humid forest (Bosque Laurofilo) with species such as the Lily of the Valley tree and the Northern Belloto (Crinodendron patagua and Beilschmeidia miersii).

Coast Matorral is a low, soft scrubland which extends from La Serena in the north to Valparaiso in the south. It's possible to find low scrubs, such as Fuchsia lycioides and Lobelia polyphylla, and taller ones, such as Escallonia pulverulenta, Puya chilensis, and Puya venusta.

The Espinal is a savanna plant community, composed of widely spaced clumps of trees. Much of the espinal was formerly 'Matorral' degraded over the centuries by intensive grazing of sheep, goats, and cattle.

The espinal is another community which is conspicuous in Coquimbo. It abounds in the interior portions with dry atmosphere and low elevations. Its northernmost point is near Samo Alto.
The espinal is dominated by the thorny Espino (Acacia caven) and to a lesser degree by two other trees: Guayacan (Porlieria chilensis) and Algarrobo (Prosopis chilensis). The general aspect of the espinal is a more or less open forest of trees and spiny scrubs with a abundant ground cover of spring-blooming ephemeral and scattered perenial bunch-grasses.

There are numerous opinions as to whether the espinal is a natural or man-made biome. This vegetation, natural or shaped by man, is part of the region and will be considered as the other types of Mediterranean vegetation. In fact, the espinal appears to be expanding into areas heavily grazed low sclerophyllous woodlands.

The maximal upper altitude of the vegetation follows a downward trend from North to South. At the height of La Serena, the limit is 13,000 feet and goes down to 6,500 feet south of Concepcion. We can distinguish different types of forests:

Sclerophyll woodlands and forests were once more extensive, but are now small patches in the coastal region and Andean foothills. The sclerophyll forests and woodlands are composed predominantly of evergreen sclerophyll trees. The sclerophyll woodland is similar to California’s oak woodlands; a typical tree of the 'Bosque' is the Boldo (Peumus boldus), which appears rather similar in the landscape to the California Live Oak of the Californian coast (Quercus agrifolia). Other characteristic matorral species include the Chilean acorn (Cryptocarya alba), Lobelia excelsa, Mayten tree (Maytenus boaria) and Soapbark tree (Quillaja saponaria). We can estimate the average height of these forests at about 10m.

The 'classical' forest. Before the Spanish conquest of Chile, the Central Valley, the coastal region and the Andean foothills were more wooded. The foundation of Santiago in 1541 and the digging of a tunnel, started a continued cutting of a huge amount of trees. There are still hidden areas with Patagonian oak (Nothofagus obliqua), canelo (Drimys winteri), Kôwhai (Sophora microphylla)... The height of the forest ranges from 10m to 25m.

Rainforest. On the southern boundary of the Mediterranean climat perimeter, some forests catch our attention. Although they thrive in cooler climates, they still make the connexion with the sclerophyllous forests.

With increased rainfall and a shorter dry season other groups of trees becomes dominant. The height of these forests can range from 20m to 30m. Various species of southern beech (Nothofagus) predominate in the southern part of the Mediterranean climate zone of central Chili near Concepcion. These beeches come from the same family (Fagaceae) as the oak and the chestnut tree.

In central Chili the deciduous forest 'Roble - Hualo' remains more intact than others. Although located at the foot of the Andes, South of Santiago, the two dominant species that give their name to the forest are well adapted to colder temperatures and increased humidity. They are even resistant to snowy winters at higher elevations. These species are also mixed with sclerophyllous forest in the transition areas on the lower slopes.

At the southern end of the Mediterranean climate zone are vast forests of 'Araucaria'. The genus Araucaria is a primitive conifer; some taxa are also found in eastern Australia and New-Zealand.

We can enjoy the National Parks of the Andean foothills (Conguillio NP) and the beaches of the coast (Nahuelnuta NP) at about 38° latitude.

It's impossible here to name all the species and varieties that will be planted on this course. We give a serie of photographs which form the basis for the ambiances and the Latin names of the most important plant species in these pictures.

Landscapes under development for the Chilean section 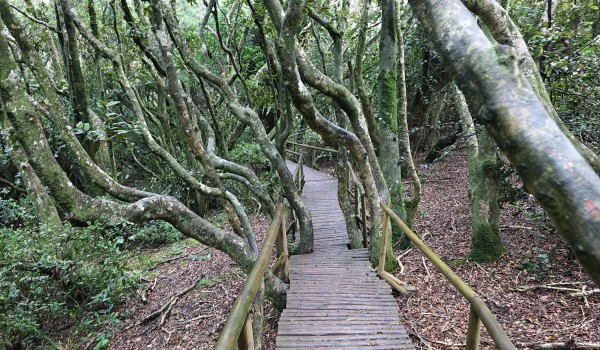 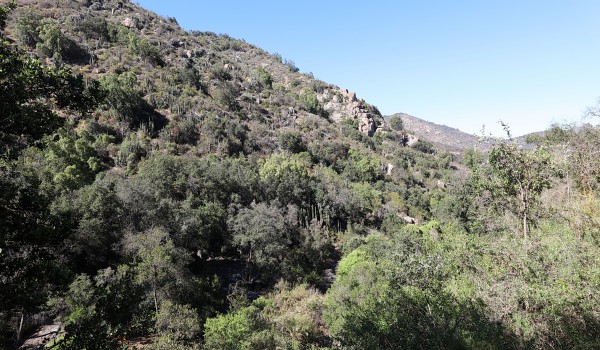 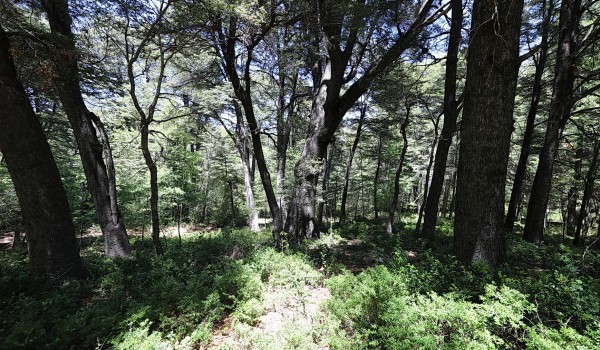 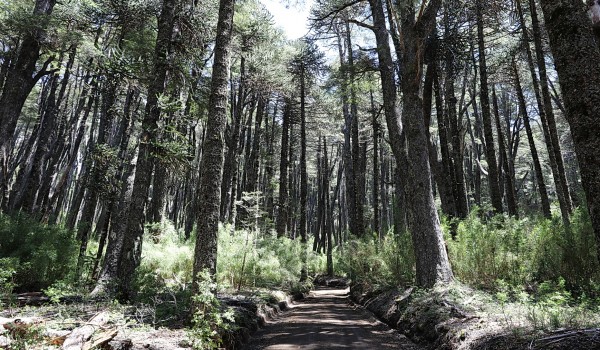 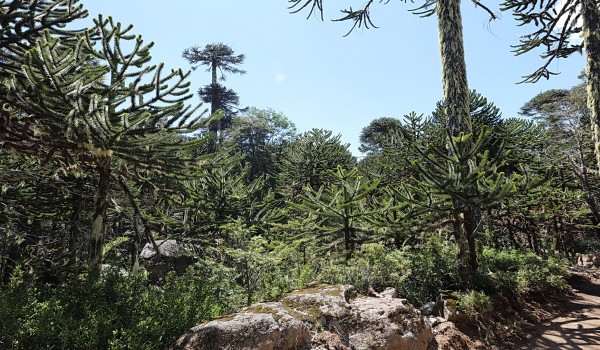 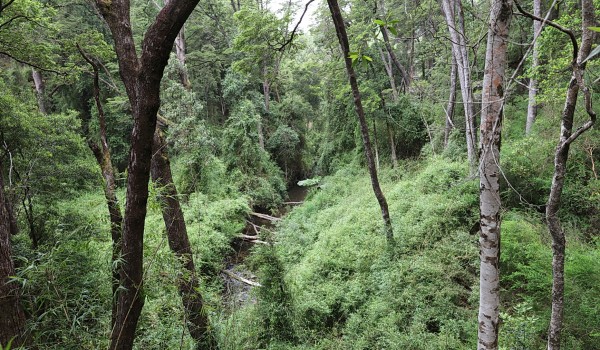 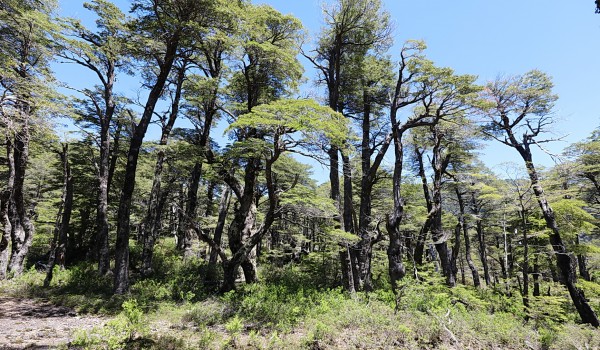 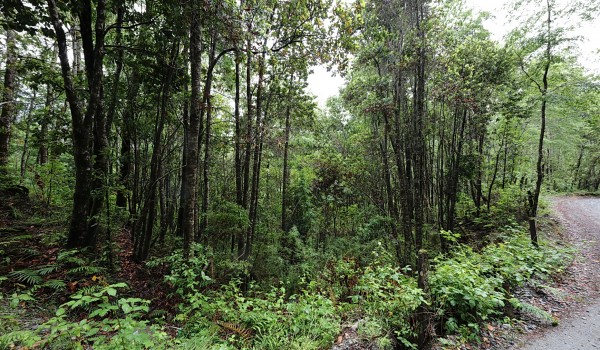