Map of California with a selection of cities, parks and biomes 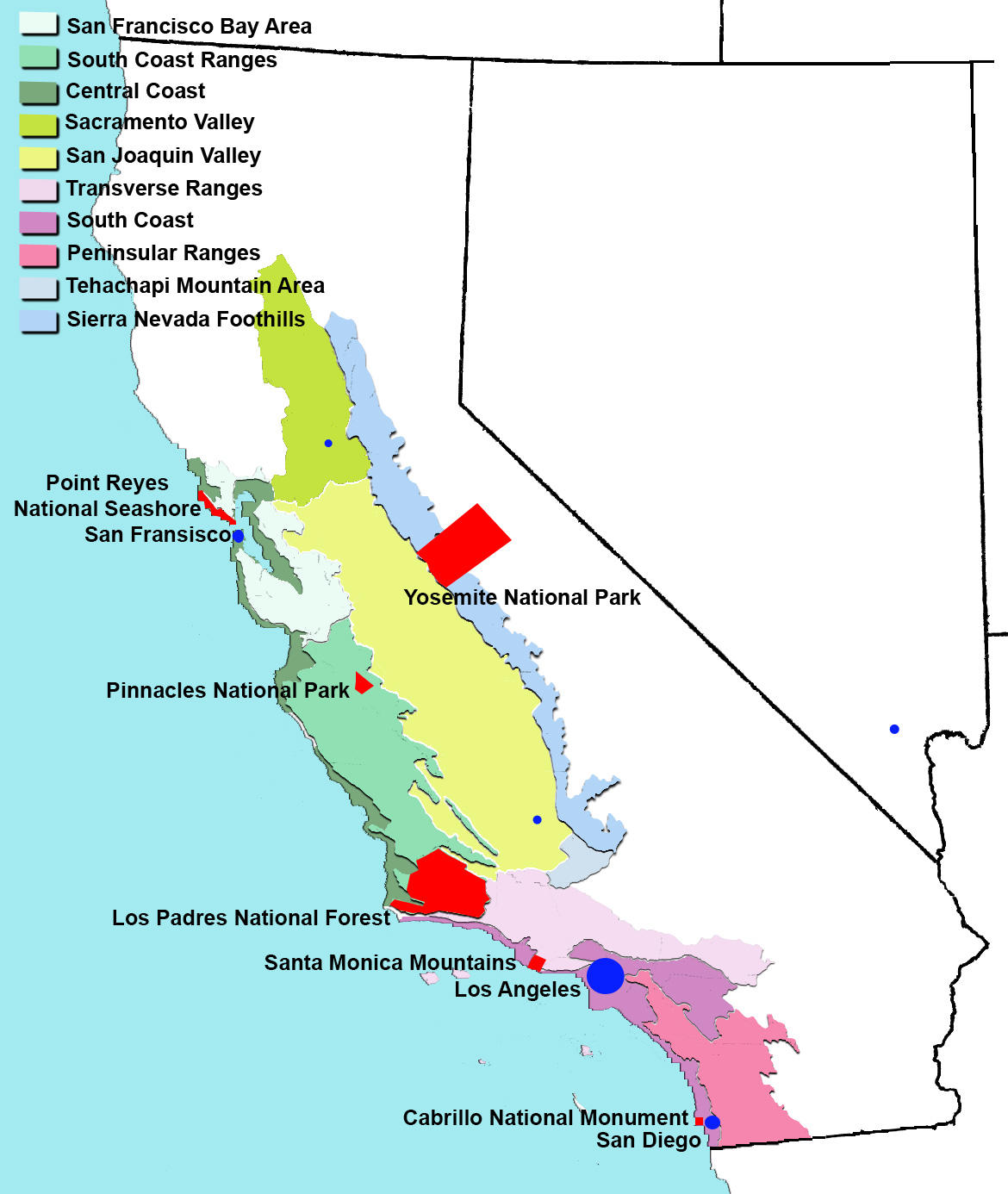 On a total area of 12 acres dedicated to Californian landscapes, 5 acres will be accessible by a guided tour through different mood images. This tour will give a condensed view of what California offers of Mediterranean-type flora.

The area we are interested in extends from the north of San Francisco to the San Diego area. The dominant natural feature is the presence of the Eastern San Andreas fault that "separates" the geological peninsula from the rest of the mainland of California. Given this particularity provoking a mosaic of ecosystems the result is something very similar to the Mediterranean ecosystem.

These areas are on the route of the guided tour of the Botanical Parks :

California zone - Zoom to see the detail of plantation

California covers 423.970 km² and has immense natural parks along its coast and inland. The diversity of natural features of California brought together a large variety of plants. Geologically, California has one of the most diverse assemblages of terrestrial forms, thus there is a greater amount of vegetation types and ecosystems thus the denominator Biological Hotspot. This state offers the greatest variety of terrain and climate than in any other state of comparable size in the USA.

It all began with ancient geologic forces that created the rocks and soils. Particular characteristics of these soils determine which types of plants can survive in different locations. Hills, valleys and exposure provide further discrimination for plants depending on their needs of sunlight and wind tolerance. Nothing is random and plants grow where they can survive, thus forming the foundation for all other life.

Western California is the only US-region with a Mediterranean climate. This is the result of the influence of temperate humid air masses in winter and tropical-dry in the summer. It corresponds with the transition between the dry tropical-climate of Mexico and the oceanic climate of the north coast. Winters are warm (over 52°F on average) and rainy; the summers are warm (San Francisco) to relatively warm (Los Angeles) and especially dry, favouring fires in this season (Los Angeles area). The distribution of rainfall in the state is very irregular. The climate of California differs from that of the Mediterranean basin by the presence of the Pacific/Californian cold ocean-current that causes coastal fogs that cools summer temperatures. The exposure and position create microclimates in some coastal areas.

The typical vegetation-type is called Chaparral

This is a scrub formed by bushes and shrubs that are found in California and north-western Mexico. This ecosystem belongs to the category of forests, woodlands and Mediterranean maquis. The word comes from the Spanish "chaparro" which is derived from the name of the holm oak (Quercus ilex); This ecosystem is composed of woody shrubs and trees typical of this climate; the genera Quercus and Juniperus and the plant-families Rhamnaceae and Proteaceae, etc. It is the only one that can be found all along coastal California and represents the wildest type of vegetation this state: The chaparral climate is characterized by extreme drought in summer and the vegetation by deep roots with evergreen shrubs adapted to fire and with limited water retention capacity. Unlike other biomes, the chaparral forms an almost impenetrable green wall with nearly rigid stems and leathery leaves. Underneath the ground is often devoid of vegetation. This type of vegetation is not the only one in California. Geological differences, Pacific winds, the proximity of the desert, the mountains; everything is there to create a nice variety biomes with specific plant species.

There are variations in the chaparral.
The Mixed Chaparral is found in humid mountains on the north facing slopes. It contains a number of woody vines and tall shrubs, including dwarf oaks (Quercus berberidifolia), Ceanothus spinosus and mountain mahogany (Cercocarpus betuloides). The Ceanothus Chaparral grows mainly on stable slopes and ridges. On some slopes, bigpod ceanothus (Ceanothus megacarpus) represents over 50% of the vegetation.

Near San Francisco the National Park of Point Reyes National Seashore is a jewel of California. Unique geology, soils, and climate conditions make for a highly variable landscape within a relatively small land base. The Seashore encompasses over 70,000 acres of dunes, sandy and rocky beaches, coastal grasslands, Douglas fir and Bishop Pine forests, wetlands, chaparral, and wilderness lakes. The broad range of plant communities supports over 900 species of vascular plants. This number represents about 15% of the California flora. 61 species found in Marin County are known only from Point Reyes.

Yosemite National Park is a 195-mile escape from urban San Francisco or a 315-mile journey from Los Angeles. The expansive park’s 747,956 acres or 1,169 square miles, with over a thousand plant species. Designated a World Heritage Site in 1984, Yosemite is known for its granite cliffs, waterfalls, clear streams, giant sequoia groves and biological diversity. Two wild & scenic rivers, the Tuolumne and Merced, begin in the park and flow west to the Central Valley. Vegetation changes from oak woodlands to chaparral scrublands.

The native plants of Yosemite National Park are a significant part of the exquisite beauty and biological diversity of the park. The combination of climate, topography, moisture, and soils influence the distribution of biome across an elevation gradient from 1,800 feet to over 13,000 feet. Vegetation zones range from scrub and chaparral communities at lower elevations, to subalpine forests and alpine meadows at the higher elevations.

It's possible to find till 3,000 foot, the hot/dry summers and cool/moist winters of the Mediterranean climate giving rise to the lower montane forest zone. The accumulation of several feet of snow during the winter is not uncommon and can stay on the ground for several months. The diversity of tree species found in this zone make this a beautiful and interesting forest to explore.

More up, the upper montane forest begins at higher elevations near 6,000 feet, where the montane climate is characterized by short, moist, cool summers and cold, wet winters. Snow begins to fall in November and may accumulate to depths up to six feet and remain until June. Pure stands of red fir are typical of this forest. Jeffrey pine, which has bark that smells like vanilla, and the picturesque western juniper can also be found in this zone. Beautiful wildflowers bloom in meadows from June through August.

Finally, the upper montane forest is replaced by the subalpine forest near 8,000 feet, where the climate is cooler with an even shorter growing season due to long, cold, and snowy winters. The alpine zone of Yosemite is easily distinguished as it is above tree line. No trees grow in this zone due to the harsh climatic conditions. Short, cool summers with long, cold, and snowy winters are typical at these elevations. Many granitic outcrops, scree and boulders limit the growth of vegetation. Herbaceous plants are to flower and produce seeds quickly during the short frost-free period of the summer.

Progressing towards the south, we find the Pinnacles National Monument. The park includes the High Peaks mountains. The striking beauty is attributable, in part, to the Park’s geologic formations, showcase chaparral habitat, finely intergraded ecosystems, and protected native plant and animal diversity. The park covers about 26,000 acres in the southern part of the Gabilan Mountains, one of a series of parallel northwest-trending ridges and valleys. Located near the San Andreas fault along the boundary of the Pacific plate and the North American plate, it is an excellent example of tectonic plate movement. The "Pinnacles Rocks" are believed to be part of the Neenach volcano that occurred 23 million years near present-day Lancaster. The San Andreas fault has divided the volcano and the Pacific plate crept north carrying the Pinnacles with it. The work of water and wind eroded these volcanic rocks to form the unusual rock structures that we see today.

This area has still a Mediterranean climate although the park is just 40 miles from the Pacific Ocean. The mountains to the west strongly modify the oceanic influence before this reaches the interior. Snow falls almost every year between mid-December and January in small quantities at higher altitudes. Chaparral is one of the vegetation types adapted to the hot and dry summers in the park. Forming about 80% of the park's vegetation, the chaparral ecosystem is not composed of a single species but rather a subtly varied vegetation covers the surface. Due to the topographic variations, weather, microclimate and its position along the intersection of the areas of the ecosystem, this area offers a very diverse vegetation.

Plants :
Ferns : The dry climate of the Pinnacles may seem like an unlikely place for ferns to grow. During the summer months the deep canyons provide shade for moisture-loving species, such as horsetail ferns (Equisetum). Other species, such as the bird's-foot and coffee ferns (Pellaea mucronata and Pellaea andromedifolia), tolerate dry conditions.

Some parks are not only there to protect the environment. Wild flora has to adapt to the significant human presence in this densely populated region. National parks also have a role of environmental regulation. This is the case among other things for the Los Padres National Forest, which is responsible for:

The Santa Monica Mountains are home to 12 biomes, which are derived from 26 vegetation associations identified by the California Natural Diversity Database classification system. These include coastal salt marsh, coastal strand, coastal sage scrub, chaparral, coast live oak woodland, riparian woodland, valley grassland, valley oak savane, freshwater ponds/lakes and rock outcrops. Vegetation communities are determined by the following factors: presence of water, elevation, soil, proximity to the ocean and presence and frequency of fire. Located adjacent to the city of Los Angeles, the second largest urban area in the United States, Santa Monica Mountains National Recreation Area protects one of the largest and most significant examples of Mediterranean ecosystems in the world. The climate of the Mediterranean ecosystem is characterized by wet winters and warm, dry summers. This along with the diverse topography in the Santa Monica Mountains has created a landscape filled with unique natural resources.

The Santa Monica Mountains are geologically complex and characterized by steep, rugged mountain slopes and canyons. Elevations range from sea level to more than 3,000 feet. The Santa Monica Mountains are adjacent to 46 miles of scenic California coastline with sandy beaches and rocky tide pools and lagoons.There is tremendous ecological diversity within the Santa Monica Mountains. They are home to over 1,000 plant species.The rugged coastline offers narrow sandy beaches and rocky shores. Dense chaparral and fragrant sages cover the canyon walls. Inland, lone valley oaks accentuate the grassy hillsides. Born from the collision and sliding of the Earth's crustal plates, the mountains are home to some of the most unique and rare natural features and ecosystems in the United States.

The Cabrillo National Monument begins from the peninsula down to the San Diego Bay on the east and the Pacific Ocean on the west, one can see the scrubland habitat. The scrubland on Point Loma includes four biomes: southern coastal bluff scrub, maritime succulent scrub, Diegan coastal sage scrub, and southern maritime chaparral. These communities are home to a variety of plant species such as Mojave yucca, Shaw’s agave, California coast poppy, California buckwheat, California sagebrush. These biomes make up the coastal Mediterranean ecosystem. The plants survive through large roots or bodies where they store water to use when needed. Other plants have leaf adaptations that prevent the loss of water. The plants are pollinated by animals. The seeds of some plants are easily caught in the fur of animals carrying them to a new germination spot.