The Castle's Southern Park and its river.
The Castle's Southern Park has retained its 19th century atmosphere. Here, you will find centuries old trees such as parasol pines and Aleppo (Pinus pinea and P. halepensis), cypress (Cupressus sempervirens var. Horizontalis) and Cedars of the Atlas, Lebanon and Himalayas (Cedrus atlantica, C. Libani and C.deodora). The Laurels which were growing at the foot of the big trees were replaced with camellias. These beautiful flowering plants are now scattered all along the river and in the park surrounding the Castle, for more information of our camellia collection "Click here".

A 130m long river has been laid out, meandering through the garden respecting the natural slope of the land. It finds its source at the foot of the Himalayan cedars and the implementation was completed in 2010.

The creation of a river with no stagnant places (thus avoiding the proliferation of mosquitoes) and rocks to provide a protective habitat, has been a main asset for the colonization of the river banks by amphibians and insects. This development has fostered a vital interaction between wildlife and flora and since then we have seen an even better plant development.

The River garden - zoom to see the detail of plantation 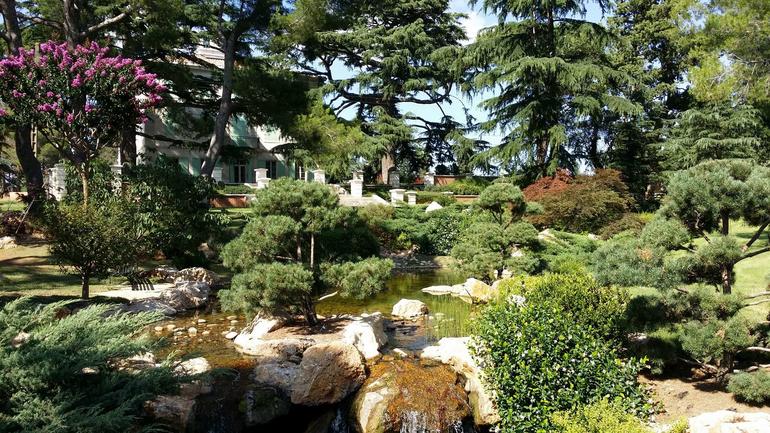 It consists of alternating ponds, waterfalls and rapids offering different views and panoramas. 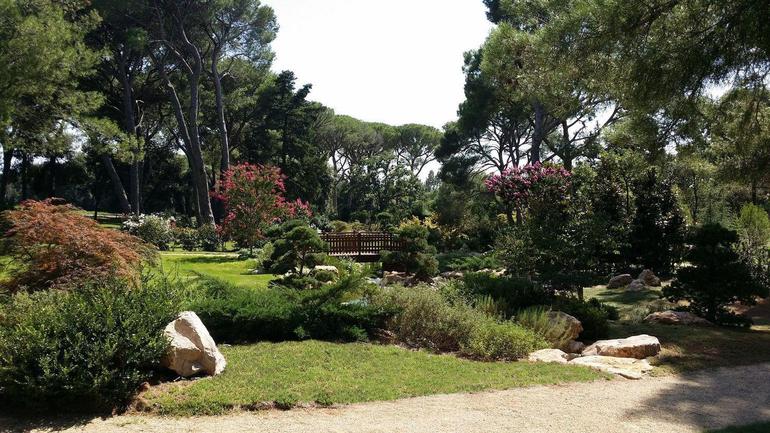 From the castle's terrace, the visitors may take a path that follows the river and guides you through various ambiances. 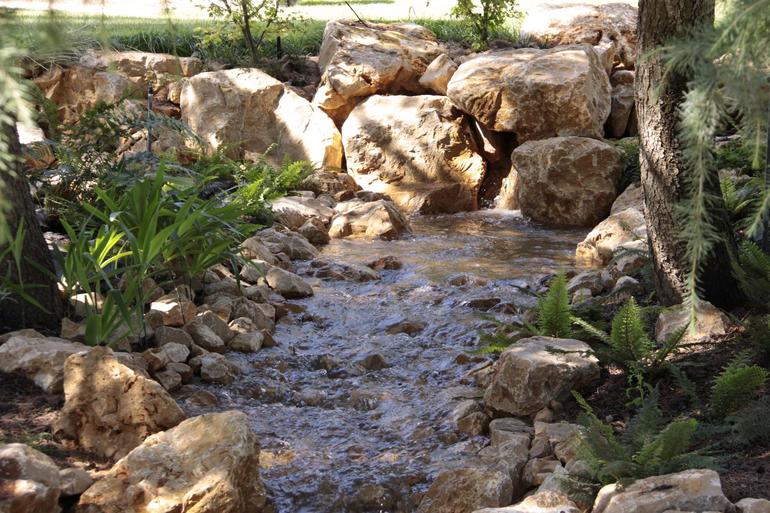 The first atmosphere : the river's source and its universe of underbrush and ferns. 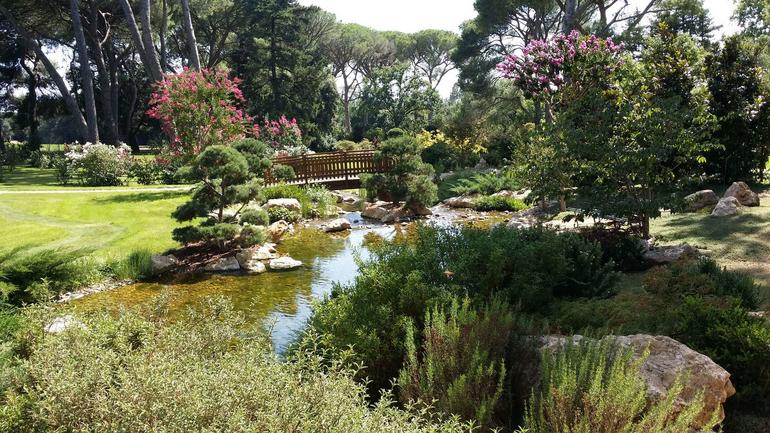 Followed by a Japanese-inspired garden with plants from Mediterranean areas around the world. 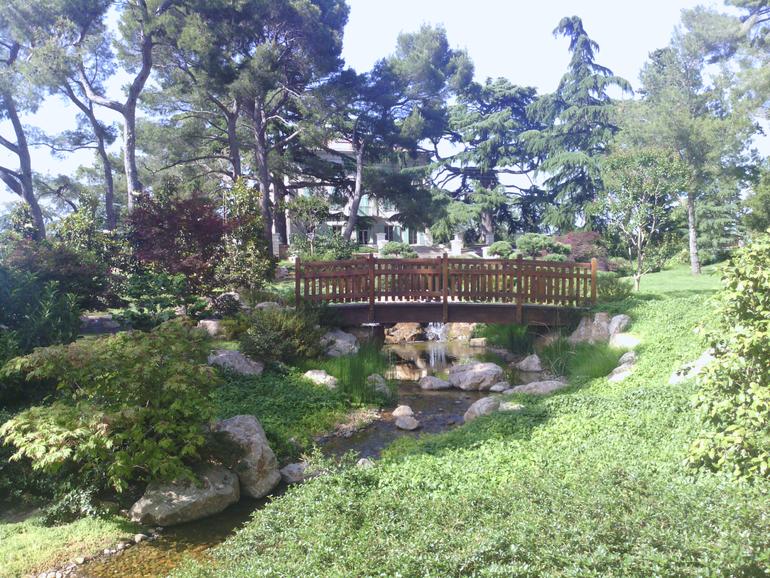 The first bridge offers a beautiful view of the waterfalls, magnolias and camellias. 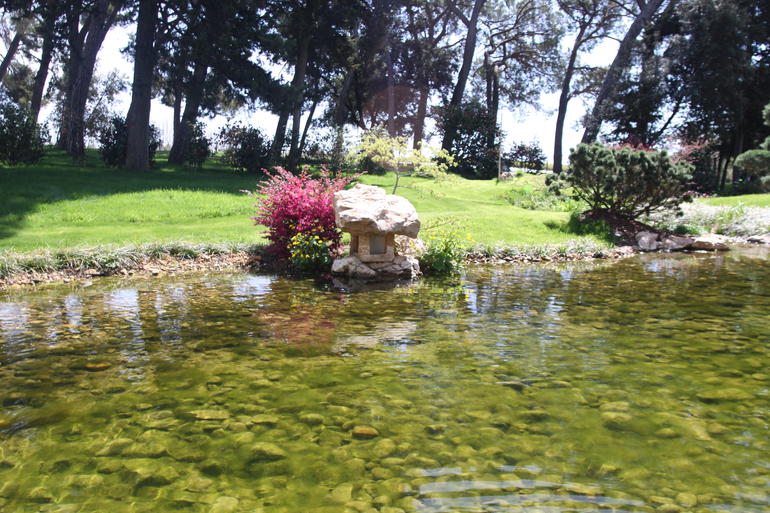 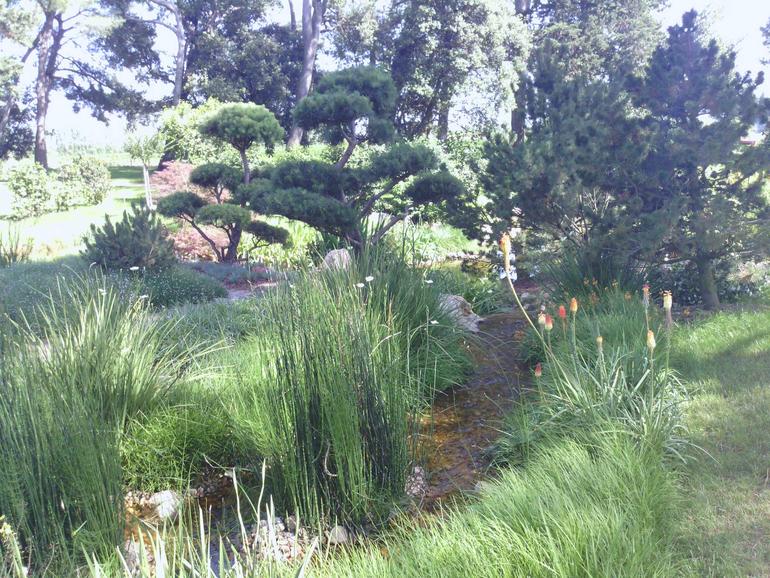 The island, in the shape of a turtle, is very peaceful due to the sound of the water from several small waterfalls. Here you will find horsetails, nérines and iris. 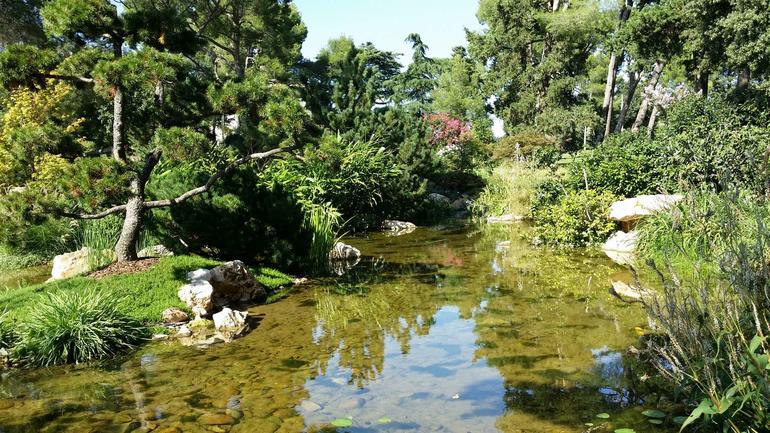 The river meanders through "the garden of contemplation" which is equipped with benches  to meditate or just enjoy the serenity. 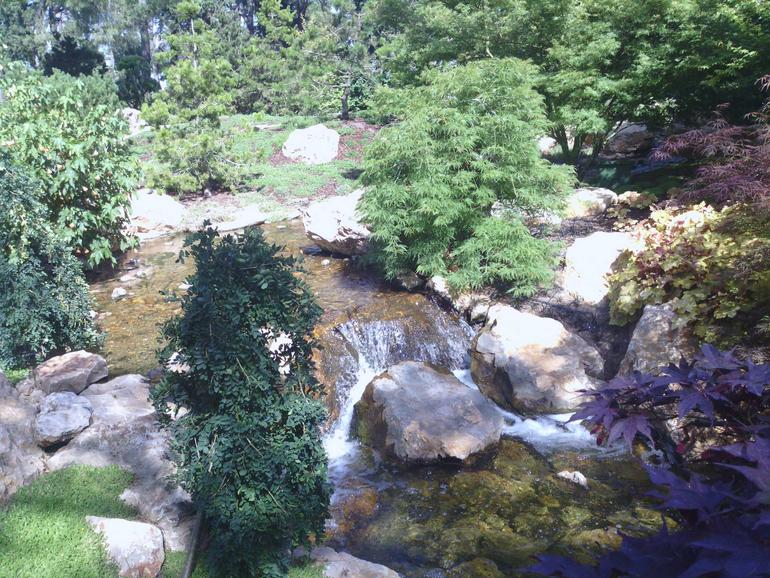 The route ends in a forest, typical of the Southern Alps, where the river becomes a small stream spanned by the second bridge. The path leads away from the river and the tour continues under the pines where the collections of camellias flourish. 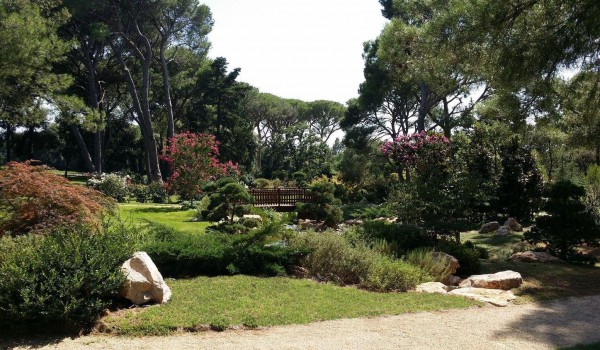 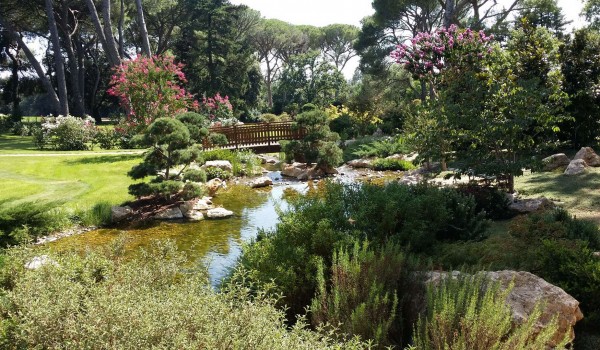 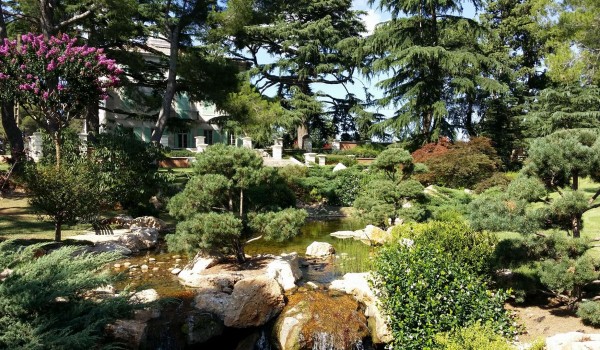 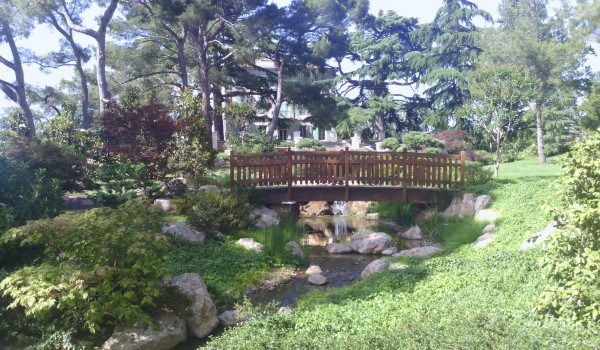 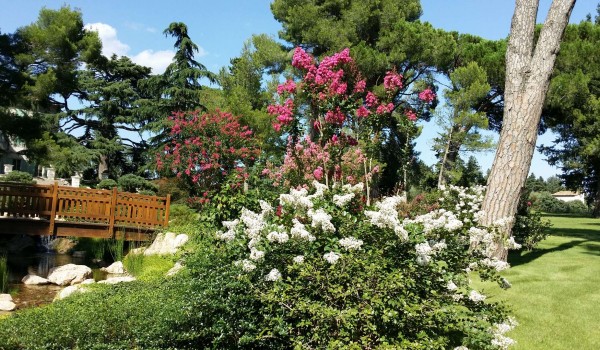 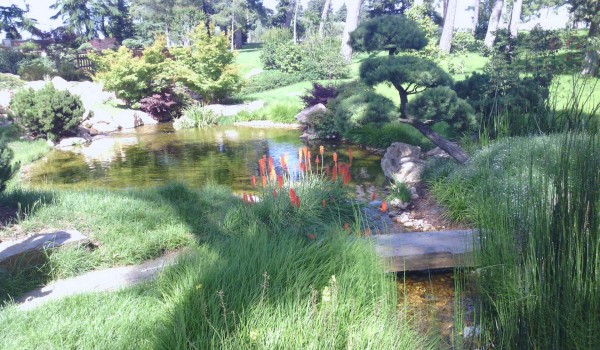 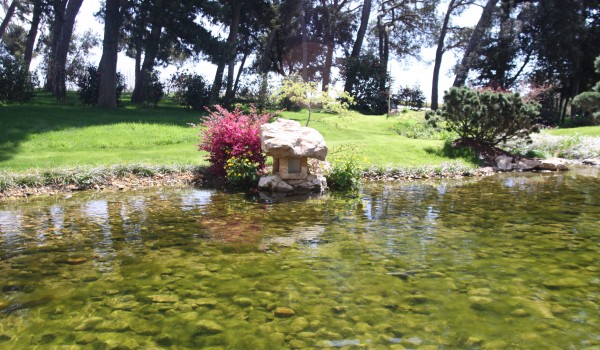 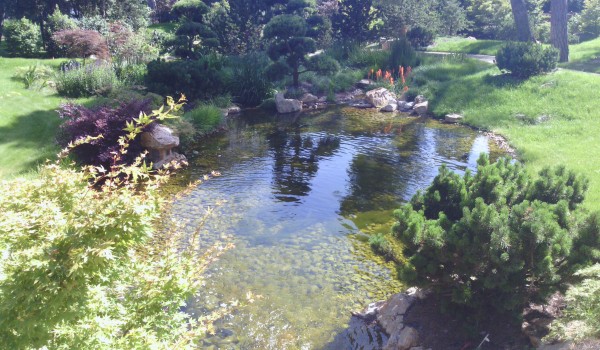 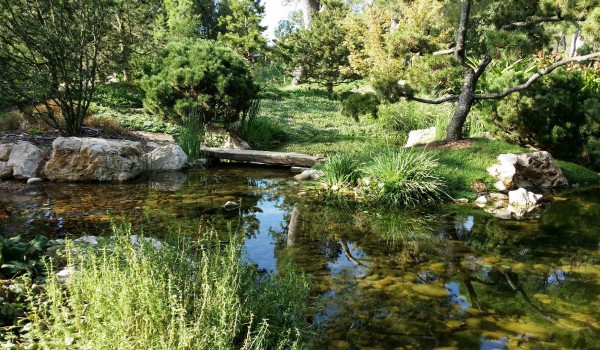 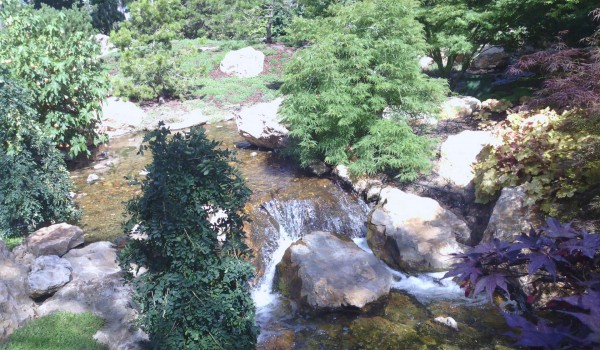