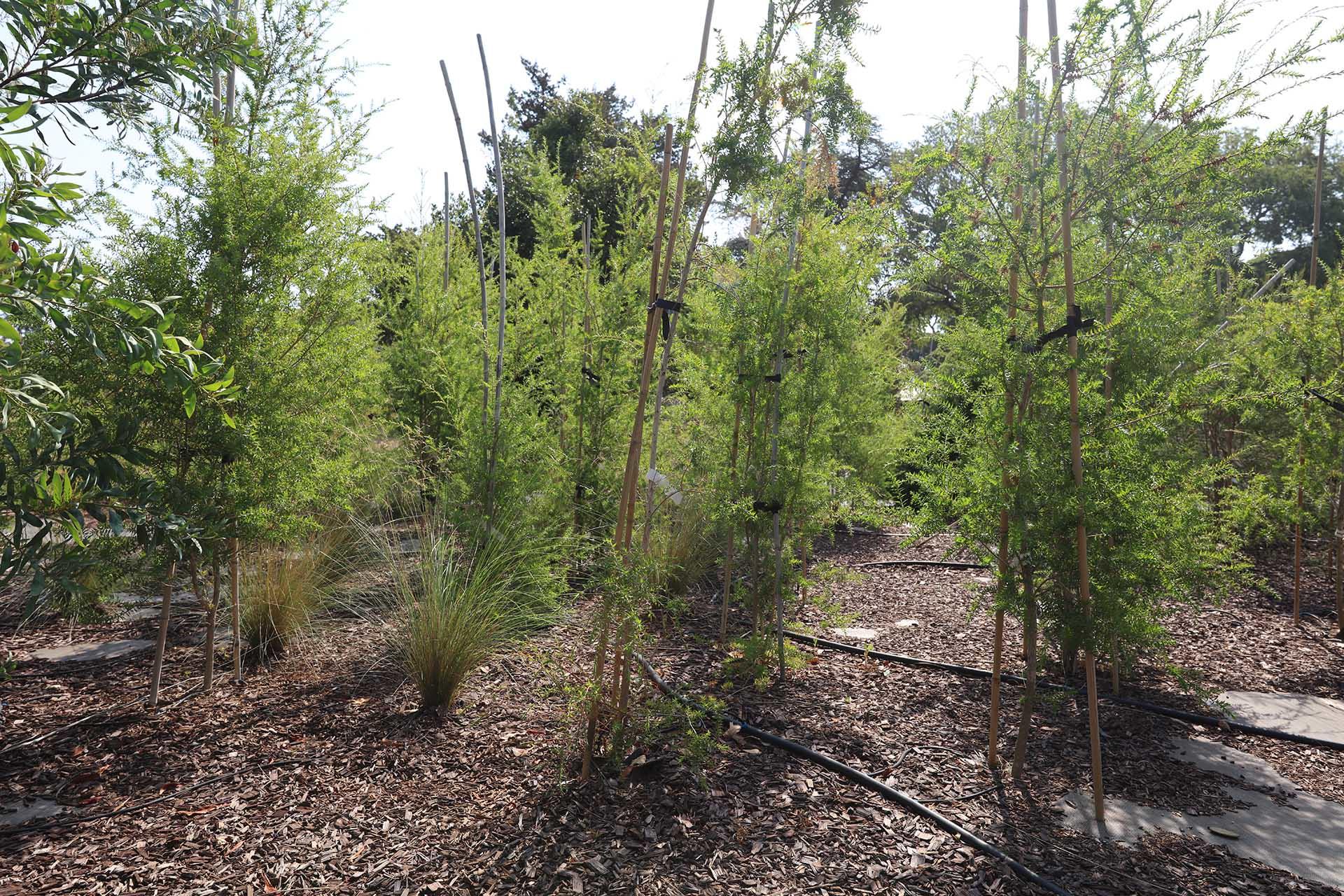 Melaleuca is a member of the very large Myrtaceae family. It is a very important genus of about 396 species and sub-species of which about 390 species are endemic in Australia.

Distribution and habitats
From the tropical North where 'Paperbark' swamps are common, throughout the arid inland, often in sandy or gravelly soils, to the wet and cold coastal areas of Western Tasmania. While Australia is the home of most Melaleuca species, a few tropical species extend beyond Australia to the north, where they are found in countries such as New Guinea and New Caledonia. It was in fact from one of these species found outside Australia that the genius name is derived. The genus was created in the 18th century by Carolus Linnaeus and takes its name from the Greek 'melas' meaning black, and 'leucos', white, apparently because of the black trunk of the tree (probably charred by fire) and the white bark on the higher branches.

Growth Habits and Features
Many Melaleuca grow near water, often in swamps and estuaries. In arid lands, they often grow in dry streams; still others grow happily in sandy soils with low to moderate rainfall, especially in the sand heaths of western Australia. Many Melaleuca species prefer acidic and moist soils where floods occur only for a limited time. The habitats of Melaleuca are numerous and can be granitic outcrops, mountain passes or valleys where the humidity is abundant. He is also found in sand dunes, whether coastal or inland, on sandstone escarpments, in dry- or wet sclerophyllous forests and also as forest shrubs or in swamps.

The foliage of Melaleuca takes many forms, ranging from tiny scales-like leaves of M.micromera to large leaves of M.veridiflora that resembles Eucalyptus. The foliage is usually a shade of green but some species such as M.argenta have silver leaves because of the density of the fuzz present on the leaves.

Like many members of the Myrtle family, the Melaleucas have foliage more or less loaded with oil like M.alternifolia whose foliage is used for commercial distillation. The flowers of Melaleucas are often very prolific in nectar which provides abundant food to insects such as butterflies, birds and many small animals.

The Melaleucas have a great capacity of adaptation to their environment which allowed them to withstand extreme conditions. Most species are able to regenerate after a forest fire like the Eucalyptus do.

Use of Melaleuca
No specific breeding program has been established for Melaleucas, but spontaneous hybrids have occurred in cultivation. He's widely used in horticulture and to a lesser extent in floriculture. He's commonly used for amenity and environmental planting but rarely to control the wind or soil erosion. The use of a limited range of species in parks and gardens (M.armillaris, M.hyperricifolia ..) is common. In recent years, different varieties of melaleuca have been grown by enthusiasts who are experimenting with species unavailable in general nurseries.

Collection level within the scientific classification of species : we have placed our collection of Melaleuca on the level of the genius Melaleuca.
(Myrtaceae family, Myrtoideae subfamily, Melaleuceae tribe, genius Melaleuca)

State of the collection : We currently have on site 126 taxa of the genius Melaleuca.