Acacias in the Australian test garden 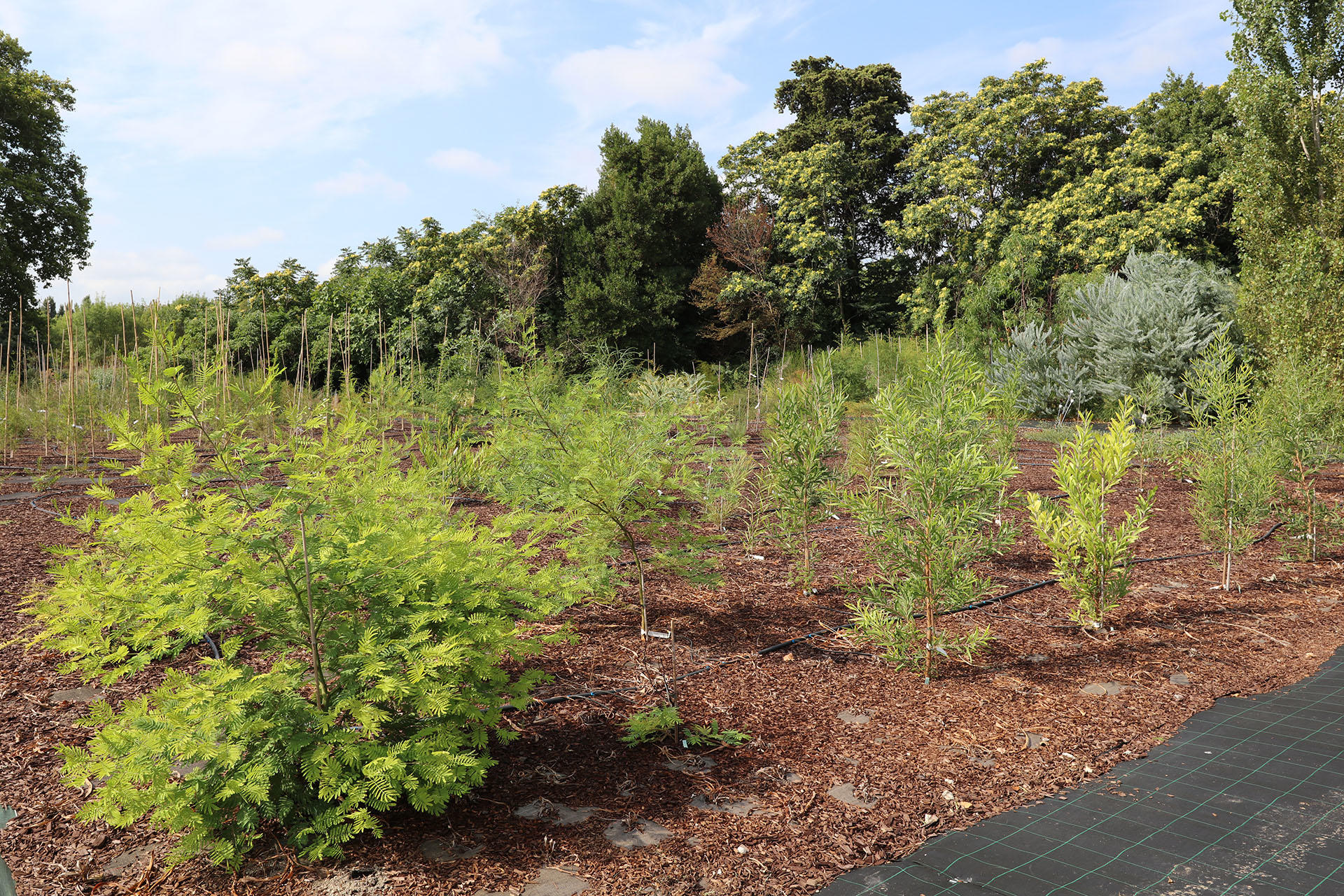 Acacia is the largest genus in Australia, with over 1,156 species out of a total of about 1,624 species. Africa has the largest number outside of Australia but it is also found in Asia and the Americas.

Distribution and habitats
Wattles are found naturally in all states of Australia in greatly varying climatic and soil conditions, from coastal to sub-alpine, and from high rainfall to arid inland areas.

Growth Habits and Features
Being such a large diverse group, they have a bewildering range of foliage and flower types. True leaves are bipinnate, but in the vast majority of species these are absent at maturity, and the petiole is modified to form a leaf-like structure known as an phyllode. Some species have small terete phyllode as in A.brownii whilst A.dunnii is commonly know as 'Elephant Ears' because of its large flat phyllodes. Flowering in some species is prolific, with the foliage being completely covered (A.prominens and A.baileyana), whilst others are less spectacular, bearing smaller flower-heads, perhaps over a longer period of time (A.uncinata). The flowers of many species are delicately perfumed (A.suaveolens).

Natural hybridization occurs to some extent, but it is fairly uncommon for such a large genus. The genus Acacia produces excellent horticultural plants and are grown not only for their flowers but also for their enormous diversity. The larger species are suited to bigger gardens and are valuable as fast-growing windbreak or shade trees. All are very useful for erosion control. By careful selection it is possible to have species of Acacia in flower during all months of the year.

Acacias respond favourably to pruning immediately after flowering and if carried out regularly this can extend the life of the plants. Main pests are borers which attack the soft wood of shrubby species and the trunks of larger species. Some feather-leafed species may be severely defoliated by green caterpillars. Research has shown that some species, like A.amblygona, are sensitive to high levels of phosphorus in the soil so fertilizers must be used with care.

Propagation from seed is the method most commonly used, as for the majority of species, seed is readily available and can be successfully stored for many years. Seed is ripe when the pods become dry and brittle, they then eventually split or break into segments. This usually occurs in hot weather. The speed of shedding depends on the temperature and it should be realised that in hot weather the pods can be green one day and split the next. The individual seeds are usually shiny and black with a very hard seed coat. This needs to be broken or softened before germination can be take place.

Use of Acacia
Acacia can be a very good source of pollen and some are popular with apiarists. The seeds are also important sources of food for a range of birds. The aboriginals used the seed of some species as a source of food, but others are known to have toxic properties.

History in the south of France : Study object for forestry since the 19th century.

Collection level within the scientific classification of species : we have placed our collection of Eucalyptus on the level of the tribe Eucalypteae.
(Fabaceae family, Mimosoideae subfamily, Acacieae tribe, genius Acacia, Acaciella, Mariosousa, Senegalia et Vachellia)

State of the collection : We currently have on site 218 taxa of the tribe Acacieae. We have become an honorary member of the Acacia Study Group of Australia and share our research results.

Presentation of our collection